Understanding how incidents happen relies on having a good understanding of human behaviour. 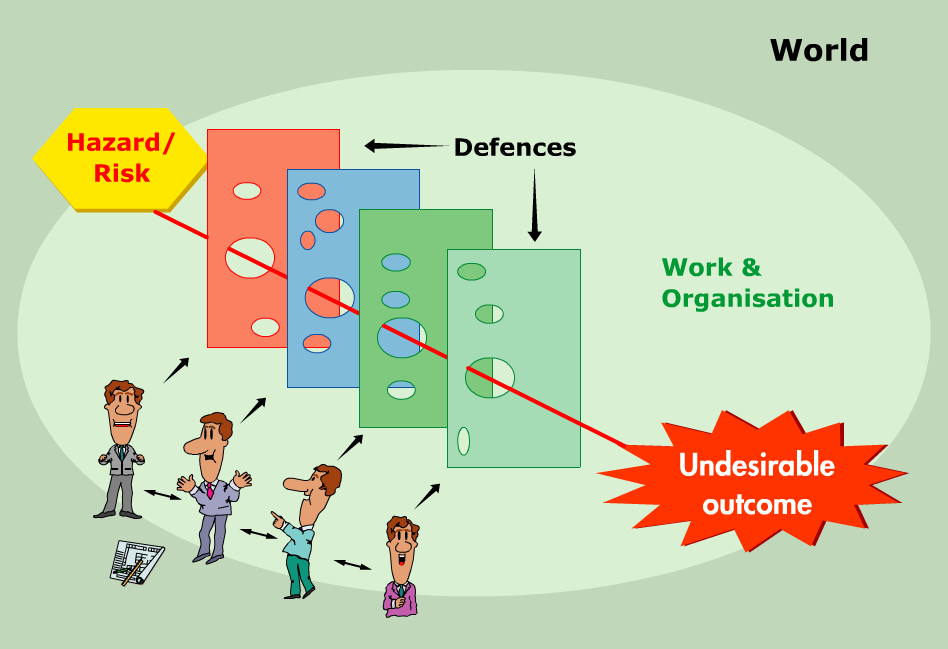 According to the Swiss cheese model, HSE management systems (HSE-MS) work by building barriers (visualised as layers of cheese) between a hazard or risk (such as a flammable substance) and an undesirable event (such as an explosion).  Barriers may be mechanical, but are mostly just people implementing and following systems, rules and procedures.  Watch the Swiss cheese video below:

These barriers are not perfect and have the potential to (and will occasionally) fail.  This potential is represented by holes in the 'cheese'.  Usually the next barrier will catch the problem, but if all barriers fail - the holes align - an accident can happen.

Increasing the number of barriers in place can help improve safety; however it is not practical or cost effective to simply keep doing this. Improving the underlying causes of barrier failures can be a more effective solution.

The immediate causes of holes are often ‘human failures’ – such as an incorrect action, or failure to take action.  People often explain this away as ‘human error’, a result of someone’s personality. This is unhelpful and often wrong.  To learn from the consequences of the actions of other people, and to understand why they took such actions, it is necessary to look at the bigger picture, i.e. a ‘system perspective’.

Human failures are usually either:

Whilst everybody suffers from lapses and slips their likelihood is increased by situations that negatively affect human functioning, such as tiredness, lighting and noise levels, and sudden changes to routines, or illogical design.  Importantly, these situations are often the result of someone else’s ill-conceived plan (e.g. the person who designed the equipment or organises the shift patterns).

To reduce the likelihood of incidents the focus should be on ill-conceived plans because they cause barriers to fail directly through mistakes and violations, and indirectly they create situations in which slips and lapses are more likely to happen, or result in systems in which a lapse or slip cause the last remaining barrier to fail.

Understanding how people develop the intention or plan is therefore essential to understand and combat incidents.

Before an intention to act can be formed, the brain needs to ask three simple questions about: Gap, Outcome and Power.

Answers to these simple questions are always based on peoples’ perceptions of the world and their beliefs about how the world works rather than facts. In hindsight, best intentions can be wrong! In most incidents people thought they were doing the right thing based on their beliefs and perceptions at the time.

Past experiences and contacts with other people have a major influence on the way people currently act – this makes up the influencing environment.  Within a work environment, colleagues and supervisors have a strong influence.   Peoples’ experiences with them, i.e., what they say and do, affect perceptions, which indirectly but significantly influence the way people act at work.

For an incident investigation the whole ‘system’ in which a person is working needs to be understood. We know their past experiences led to their beliefs about what they should do, so the question should be asked “what was the role of others in the influencing environment?” This can take many forms, for example:

Tripod incident analysis is aimed at understanding these perceptions and beliefs and how the influencing environment and past experiences have created them.

Effective avoidance of all incidents, not only a repeat of the last one, starts by understanding the environment and taking action to change it.